What is the best age to start to learn English as a second language? 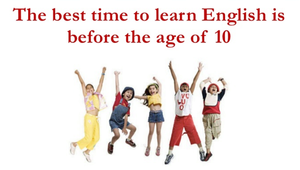 At Washburn our students start with a full-immersion English program at age four because bilingual children that learn a second language from an early age sound like a native in both Spanish and English. For more information about our early childhood program call 787-842-2227! "All researchers agree that the earlier a child starts learning a second language, the better, for more reasons than one. Some researchers say that second language acquisition skills peak at or before the age of 6 or 7. Others claim that this window extends through puberty. But, they all agree that it’s much harder for a child beyond puberty to learn a new language.

Based on the information we gain in our first few years, everything we have learned grows later in life. Research has shown that 50% of our ability to learn is developed by age 4 and another 30% by age 8. This is why three-year-olds are encouraged to learn a second language.

However, this doesn’t mean that 80% of one’s knowledge or intelligence is formed until they are 8 years old. It simply means that children develop their main learning pathways during their first few years of life.

A study conducted by a director of the cognitive neuroscience laboratory for language and child development at Dartmouth College (Hanover) has demonstrated that after the teen years, the brain changes and makes it extremely challenging (if possible at all) for an adult to learn a foreign language. This doesn’t mean that they can’t learn it; just that they won’t do so the same way as a child because the mechanisms that help language learning are not the same as they are at ages 2-5.

- Clark, (2018). The Best Age for Kids to Learn a Second Language. Motherly Journal.